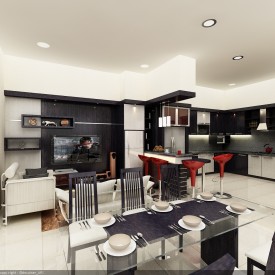 Lunarfurniture.com â Stove is considered as the most important part of the kitchen. Well, stove has become the main cooking applainces so that the food can be cooked and ready to be served and eaten by family member. Despite there are many other cooking applinaces, but stove remains the main tool which has big role in cooking process so that the kitchen is not completed if thereâs no stove in it. This fact is also happened for the kitchen set furniture. No matter how big, how complete, or how luxurious a kitchen set, when thereâs no stove in it, then the kitchen set is no longer functioned well.

Stove has changed significantly especially in the shape. The big change is caused by the change of the fuel. We might be still easily find the kerosene fueled stove which is shaped like drum, but it is no longer favorited by people since there is gas fueled stove which is quite slim and easily placed on the part of the kitchen set.

In the earlier article, we already discuss about the stove kind of the kitchen set which is called as the built in hob which is united with the top table part of the kitchen set. Right now, we will discuss about the free standing hob which is not united with the table top and the lower cabinet area. Free standing doesnt mean that it is placed separately from the kitchen set. The hob has its own area where the gas tube and oven are placed, which means, there are more space in the lower cabinet for the placement of the huge amount of big size cooking tools or eating utensils.